NEW RELEASE! How to Mend a Broken Heart by Rachael Johns

Browse: Home » NEW RELEASE! How to Mend a Broken Heart by Rachael Johns

NEW RELEASE! How to Mend a Broken Heart by Rachael Johns 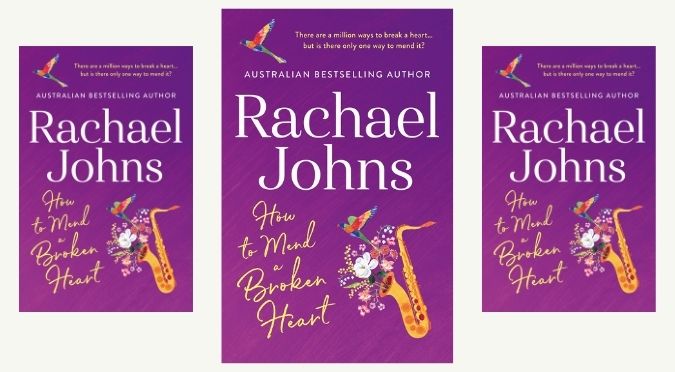 We’ve got an excerpt for you plus a few introductory words from Rachael, and after that – Rachael answers our brand new 3 BIG QUESTIONS about writing the book! 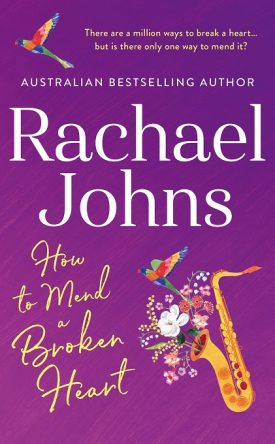 Felicity Bell has struggled to move on after her marriage broke down. Her ex has found love again, her children have their own lives, and it’s beginning to feel like her only comfort comes from her dog and her job as a taxidermist. So when Flick gets an offer to work in New Orleans for a few months, she’s drawn to the chance to make a fresh start.

Zoe is ready to start a family with her husband, but when he betrays her, she’s left shattered and desperate for a change of scenery. Joining her mother on the other side of the world to drown her sorrows seems the perfect solution.

Although both mother and daughter are wary of risking their hearts to love again, Theo, a jazz bar owner, and Jack, a local ghost hunter, offer fun, friendship and distraction. But all is not as it seems in New Orleans…

A chance meeting with Aurelia, a reclusive artist who surprises them with lessons from her life, prompts Flick and Zoe to reassess what they want too. Can all three women learn from the past in order to embrace their future?

An uplifting novel about three women joyously learning to move on after heartbreak by the bestselling author of The Patterson Girls and Flying The Nest.

It’s always exciting releasing a new book but I think I might be just that little bit MORE excited than usual about the release of HOW TO MEND A BROKEN HEART. This feels like the book of my heart because it is set in New Orleans a place where I feel owns a piece of my heart. It was so wonderful to bring this unique setting to life between the pages. The extract I’m sharing with you today is just after my two main characters meet an eccentric artist who lives in a crumbling old mansion in the Garden District and goes on to challenge them and help them grow in ways they never imagined.

BUY How to Mend a Broken Heart

Excerpt from How to Mend a Broken Heart by Rachael Johns

Taking the key from Aurelia, he slipped it into the lock and had the door open before she could complain or insist on trying to do it herself. With a slight huff, she tramped inside and they followed her into a vast entrance hall.

Goodness, Flick thought, glancing around—surely Aurelia couldn’t live all alone in this massive place? It was like an overgrown doll’s house that had been abandoned sometime in the last century. Paint flaked on the walls and the stair railing looked as if it would give you a splinter. Just as Rachel’s house reflected her appearance, this one reflected Aurelia, but it was hard to tell whether the house had given up on the woman or the woman on the house. A tarnished chandelier hung above their heads, cobwebs clinging to it and the corners of the high, ornate plaster-moulded ceilings. Trying not to look obviously nosy, Flick peered into what must be a living room filled with antique furniture, a grand piano in the corner that if cleaned up a bit could fetch a nice price. On the far wall, a row of stuffed cats sat in pride of place on top of the impressive mantlepiece.

‘Well, don’t just stand there,’ their host ordered, ‘come through to the kitchen and I’ll get you that drink.’

‘Maybe you should sit down, and we can get you a drink and anything else you need to make you comfortable?’ Flick suggested.

Ignoring her, Aurelia turned and led them further into the house, down a long hallway and into a kitchen, which although spacious, was as gloomy and oppressive as the rest of the place. A musty smell lingered and, fighting the urge to turn on a light and open a window, Flick shivered. These old houses were clearly built to withstand the extreme heat of the region, but this one could do with a blast of warm air from outside.

Aurelia pointed at a small wooden table on one side of the room. ‘Sit. I’ve got whiskey or coffee, but no milk. And no cookies or anything either.’ Her tone dared them to complain.

‘I’d love a coffee, thanks,’ Flick said, trying for friendly. Perhaps in her own home, Aurelia would feel safer, and would maybe even relax and thaw a little.

‘Can I give you a hand?’ Flick offered again.

‘I can manage,’ Aurelia replied as a cat waltzed into the kitchen. It was almost identical to the one she’d brought into the shop that morning, except smaller.

Until this moment, Flick didn’t think cats could actually scowl but there was no other word for the way this one looked at the intruders.

‘Oh Charlotte, my beautiful baby,’ Aurelia cooed, stooping slightly and rubbing her good hand over its sleek fur. ‘Did you wonder where Mummy was? It’s okay, baby, I’m back.’

Aurelia spent a good few minutes bestowing affection on Charlotte while the others looked on. Flick almost felt as if they were intruding on an intimate moment. She took a step towards the window, chancing a look into the backyard, which was as overgrown as the front. Suddenly a breeze tickled her skin and she looked around. Maybe there was a window open somewhere after all?

‘What are you frowning at?’ Aurelia accused, choosing that moment to tear herself from the cat.

Aurelia scowled in much the same way as the cat, then clumsily went through the motions of making coffee in a very ancient-looking plunger. Flick’s grandmother had had something similar back in the eighties that she regularly used when entertaining—something Flick was pretty certain Aurelia rarely did.

While the coffee brewed, the older woman found four mugs in three different cupboards and lined them up on the counter next to the plunger. Flick tried not to grimace at the thought they could probably all do with a good wash. A bit of dirt won’t kill you.

Slowly the nutty, mouth-watering aroma of fresh coffee began to dilute the staid air and when it was ready Aurelia lifted the jug with her left hand and attempted to pour. She missed the first mug entirely and as coffee splashed onto the bench, Flick swore she heard a curse word muttered under the older woman’s breath. Still, she didn’t dare offer assistance.

‘Here, let me,’ Zoe said softly, getting up from her seat. She gently pried the plunger from Aurelia’s shaky hand.

Flick braced herself for an altercation, but miraculously Aurelia smiled. Until then she hadn’t even been sure the woman’s facial muscles were capable of such contortion.

‘Thank you. I guess I’ll get used to this one-handed business soon enough.’

Once Zoe had finished pouring the coffee and wiped up the spill, they all took a seat. Charlotte leapt up and sat on the table near Aurelia who didn’t bat an eyelid. Almost in unison, they lifted their mugs to their lips—to Flick’s surprise and relief it tasted a lot better than she’d expected. Or maybe she was simply in dire need of caffeine?

After a few long minutes, Flick could stand the awkward silence no longer. ‘How long have you lived here, Miss Harranibar?’ 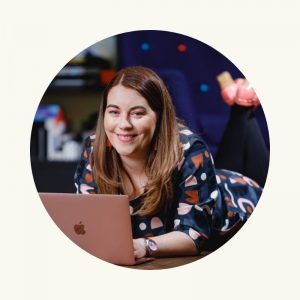 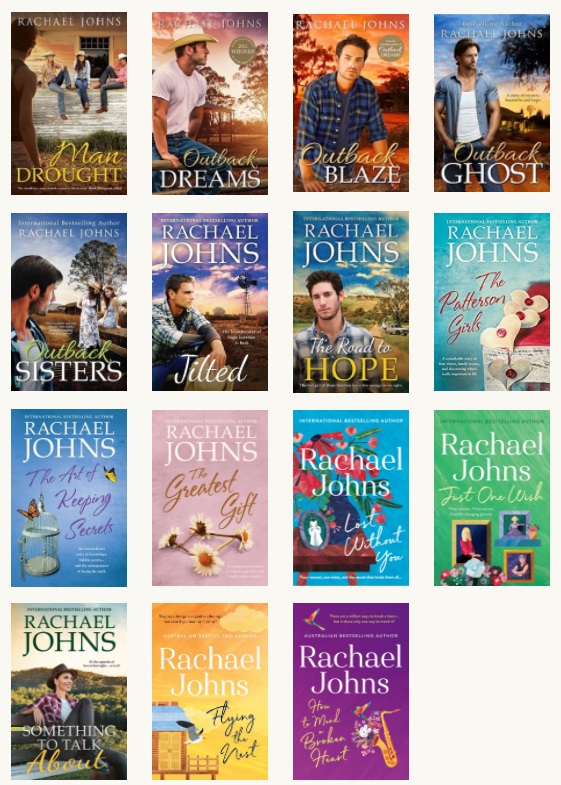 1. What gave you the most pleasure when writing the book?

Usually that’s a tricky question, but not this time. HOW TO MEND A BROKEN HEART is set in New Orleans and so the first pleasurable thing is the research trip I had to take before I wrote it and the most pleasure while writing the book was reliving that trip. It was such a joy to drip feed my love of this wondrous place into the book and bring it to life between the pages. I’ve never written a book where place has been so important to me and where my travels there have actually influenced the plot, but I would definitely like to do it again.

2. Were there any difficult aspects you faced when writing the book?

Every book I struggle with an immense amount of doubt that what I’m doing isn’t good enough and it’s always a struggle to push past that and keep writing. However, in addition for that, this particular book was tricky because I wasn’t actually sure I was going to be able to believably pull off the twist and so that was worrying. I was writing towards it, hoping against hope that it would make sense and be believable when I got there and also that the ending wouldn’t be so dramatic it felt silly. I can’t say much more than that without giving spoilers, but there was much research and a lot of plot wrangling, but in the end, I think I did pull it off.

3. When you wave your story goodbye and it’s on its way to the printers and out of your hands – how do you feel?

To be honest, by that stage I’m usually more than happy to be rid of it. I have been living with the characters and the plots in an all consuming way for the better part of a year and I’m far too close to it to see it as a reader might. At this stage, I’m often stressing it’s a book about nothing! But thankfully, roll forward about six months by the time I get the first copy in my hand and I’m feeling a lot kinder about it. Often then I open the book and flick through the pages, reading paragraphs at random, and I’m pleasantly surprised and start to like it again.

BUY How to Mend a Broken Heart