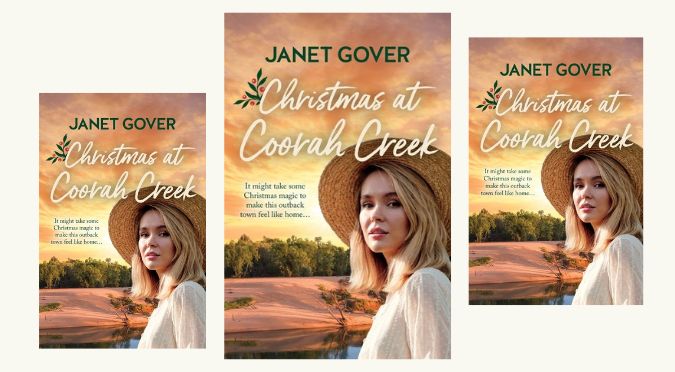 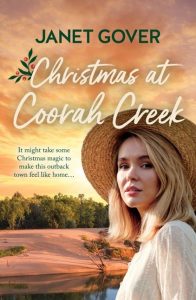 Eager to make a real difference, English nurse Katie Brooks has travelled halfway around the world to work on an air ambulance in outback Queensland. She was prepared to be a fish out of water, but she hadn’t anticipated how challenging the isolation would be. And she’d certainly never expected to be rescued on day one by Scott Collins: Coorah Creek’s prodigal son, who might just be the best thing about the town.

Meeting Katie is the one bright spot in Scott’s reluctant return to his childhood home. He has nothing but bad memories of growing up. He once vowed never to return, but now he needs to put old ghosts to rest, before beginning a new life as far away as he can get.

I saw a Christmas book on sale in a shop this week. It’s October now – and Christmas decorations and gifts starting to spring up everywhere. Too early you say? Not for me. I love Christmas.

Dividing my time between Australia and the UK gives me two very different Christmas experiences. With my Australian family, it’s always swimming in the creek and prawns on the bar-b-q. In England, it’s a big roast turkey, an open fire and with luck a family snowball fight. 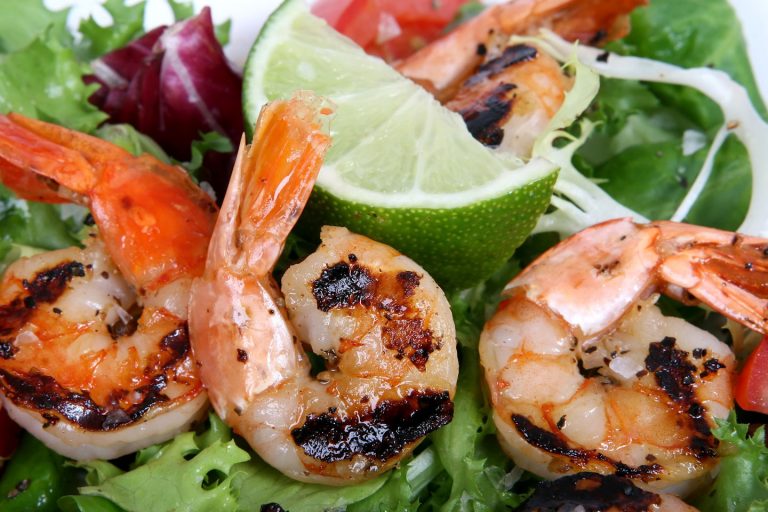 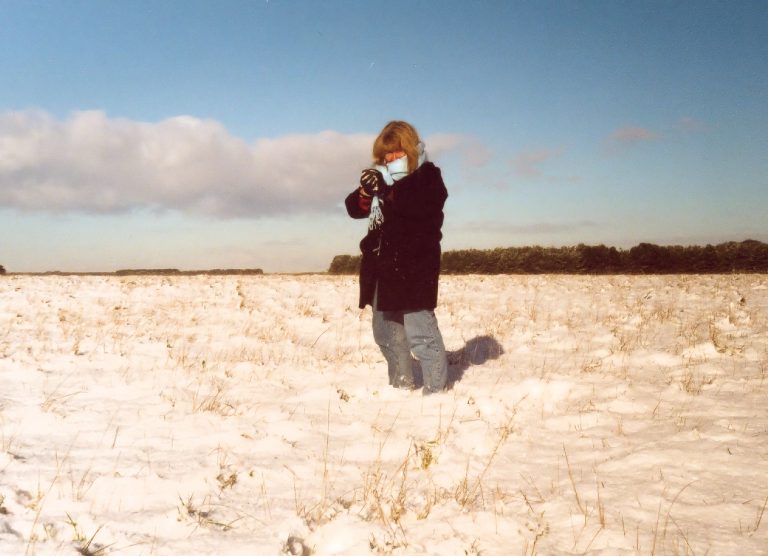 My first English Christmas seemed so strange and very, very cold to me. Our first Australian Christmas was equally weird for my English husband. That’s what inspired Christmas at Coorah Creek – the story of two people from opposite sides of the planet who need to find a way to follow their hearts and be together.

I’m happy to say we found the way. It just involves a bit of time on aeroplanes.

I hope you enjoy reading Christmas at Coorah Creek. It’s part of my Coorah Creek series but is perfectly fine as a standalone read. If you enjoy it, though, there are more Coorah Creek stories for you to enjoy.

It’s not to early to say…. Merry Christmas.

Excerpt from Christmas at Coorah Creek
by Janet Gover

In the middle of nowhere, Katie Brooks’ car exploded.

At least that’s how it felt as thick steam burst out from under the bonnet. Suddenly Katie was driving blind at high speed as the steam enveloped the front of her car. She lifted her foot from the accelera­tor and reached for the windscreen wipers. That only made things worse. The dust on her windscreen turned to mud and was smeared in a messy rust-coloured arc across the glass. Cursing, Katie turned the steering wheel and let the vehicle roll slowly to a stop on the side of the road. She got out and took a step back to look at the car she had owned for a little less than forty-eight hours. She didn’t know much about cars, but she didn’t need to know much to be certain that the blue Holden Commodore wasn’t going anywhere in the near future.

‘That’ll teach me to buy a twenty-year-old car,’ Katie muttered under her breath. ‘So much for an “Australian classic”. That’s the last time I listen to a used car salesman.’

She took a deep breath and slowly turned in a circle.

She was standing in the middle of the longest stretch of straight flat road she had ever encountered. The thin grey line extended to the horizon in either direction, without so much as a building or another car in sight. In fact, she hadn’t seen another human being for what seemed like hours. The only living thing she’d spotted was a kangaroo hopping across the road about a hundred miles back. So much space and so few people! Would she ever get used to it?

The geyser pouring from underneath her bonnet was beginning to ease. Very carefully she raised the bonnet, releasing another cloud of steam that quickly dissipated. She stared at her engine for a few seconds, before admitting it was a waste of time. She had no idea what to do. If she was going to get out of here, it wasn’t going to be in the Commodore. She swung her leg to kick the offending vehicle, but at the last minute, pulled the blow. In her open-toed flat sandals, the kick was likely to hurt her foot more than the car.

She walked into the middle of the road and looked back the way she had come. Nothing. She looked in the direction she’d been heading. Somewhere out there was a small town called Coorah Creek. She did remember seeing a sign a while ago, but had no idea how far she still needed to go. And all the road signs were in kilo­metres, not miles. So even if she knew how many kilometres, she wasn’t entirely sure she’d know how far that really was.

As she stood gazing down the road, bits from her reading leaped into the forefront of her mind. The bits about people dying of thirst when their cars broke down. And the bits about poisonous snakes and spiders. There probably weren’t any man-eating crocodiles here, a million miles … kilometres … from the coast. But weren’t the wild pigs dangerous too? Suddenly a whole less sure of herself, Katie leaned back against the car.

‘Ow!’ She leaped forward as the hot metal burned her thighs through the thin cotton of her skirt. That was another thing. It was hot here. Really, really hot! Her car’s on-again-off-again air-conditioning had barely been worth the name. And now she was standing in the blazing sun in an area des­perately low on trees. She wandered along the road a short distance, looking for a tree big enough to give her a spot of shade. Nothing. She turned her face to the sky – a brilliant arc of totally cloudless blue. She could already feel her pale English skin starting to burn.

‘Well,’ she said to the vast empty spaces, ‘I left cold, grey, miser­able London feeling burnt out by my job and that I’d lost my way. Now here I am, lost in the middle of nowhere and about to get really burned.’

The frustration building inside her suddenly exploded into a burst of laughter, but she was aware of the undertone of hysteria.

Returning to the car, she opened the rear door and rummaged around in the bags strewn over the back seat. Somewhere in there was a hat. And some sunscreen. Sweat was dripping from her fore­head by the time she found them. She stepped back from the car and began slathering the white cream over her nose and cheeks.

‘So now what do I do?’ she wondered out loud. ‘Do I wait with the car like it said in the books? Or do I start walking?’

The only answer was the distant haunting caw of a crow.

Surely someone would come along soon.

She reached for her handbag, and retrieved her mobile phone. Squinting against the bright sunlight, she looked at it with little hope. She’d already discovered that large parts of Australia did not have mobile coverage. Either that or her phone was rubbish, which was also entirely possible.

Grimacing in disgust, she tossed the phone back onto the front seat.

Just a couple of weeks ago, she’d been wrapped in a heavy wool coat, fighting her way through crowds of shoppers in Oxford Street and admiring the best Christmas lights in London. She had cursed those crowds and their armloads of parcels and bags blocking her way. Right now she would give anything to see a few of them walking towards her. She would even offer to carry those parcels for them.

Once more she looked in both directions along the road. Noth­ing but the distant heat haze shimmering across the grey tarmac. It looked like water, or …

She was suddenly dying of thirst.

Katie turned back to her car. She wasn’t a total idiot. She’d bought water at the last petrol station.

She held the plastic bottle aloft in triumphant. But her joy was short lived. There was only about an inch of liquid left in the bot­tom. She removed the lid but hesitated. Should she drink it now or wait. Surely she wouldn’t be here long? Would she?

Defiantly she drank the last of the water. There! It was done. Now someone had to find her. 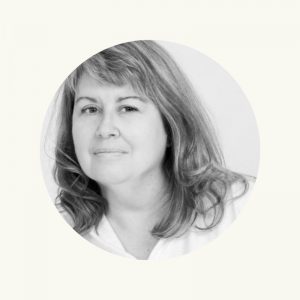